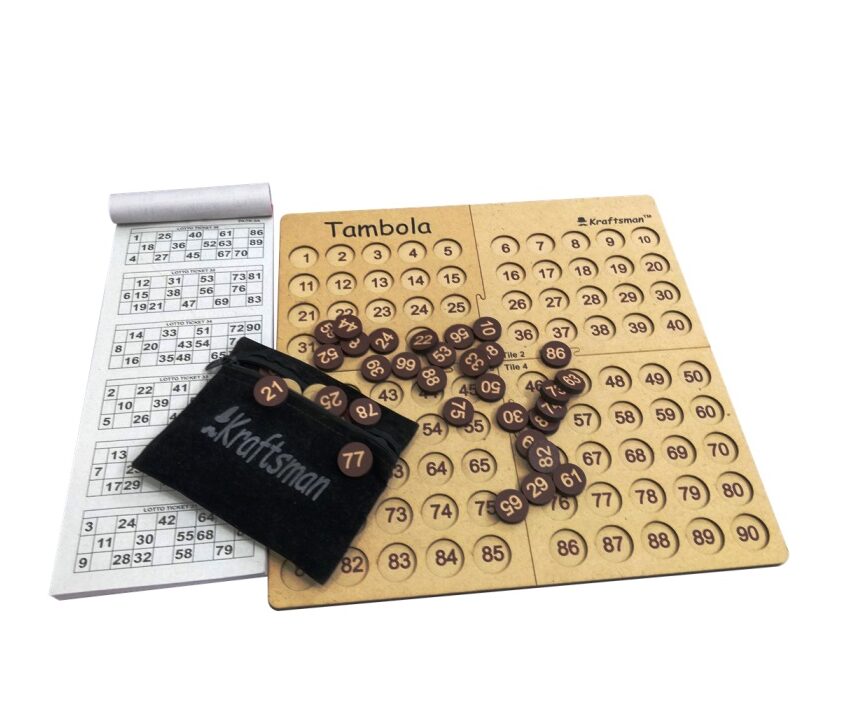 Want something to play with your whole family? Or want to do something for the Game night with too many players? Then Tambola is the right game for you, you can play this game with as many players available. This the Best Tambola Game in its board game category | Make in India.

Kraftsman presents “Tambola game” made up of 100% engineered pine wood, even the numbered coins are also made up of wood. We are looking forward to reducing plastic use as much we can and help our planet to stay happy. Our company use high quality engineered pine wooden material to manufacture all games instead of plastic or metal. That’s why this is the Best Tambola Game in its board games category.

Thereby our games are bio-degradable and environmental friendly and can be played by adults, kids and all types of age Groups.

Tambola game is also known as bingo, housie and Indian Tambola in some part of the world. It is an indoor game but can be played at outside, in any events/occasions. Lately, people have also started playing Tambola online with the help of the internet and app, people from different places can play Tambola anytime anywhere but the real fun is in playing with our loved ones.

HOW IS THE GAME PLAYED

Tambola is played by picking out numbers ranging from 1 to 90 each at a time by the host of the game. The rest are players who strike out the numbers on their ticket. The ticket has 27 squares, arranged in nine columns by three rows. Each row has a total of 5 numbers printed on it. A column can have 3 numbers in a row with a total of 15 numbers in a ticket. The game can have maximum of 25 players that can play together but not more than that. Each player must have one ticket each but can have max 3 tickets in one game. But yes, you can play with your own customized rules.

There are many stages to win the game.

WHEN WAS TAMBOLA FIRST PLAYED?

Tambola was first originated in the city of Naples of southern Italy. The year, in which Tambola started is not yet exact, some sources claim it to be in 1500’s and some says it to be in the early 18th century. In Italy the game was first known as Giuoco del lotto d’italia’. In USA Tambola is called bingo. It was mostly played in Christmas time, and prices are sometimes allegorical. Tambola is now more played in India and Pakistan.

Tambola is completely legal around the world, but at some places this game is used for gambling and other activities. Therefore, you’re completely safe having this game with you.

How Kraftsman’s Tambola game is unique

The Kraftsman’s wooden Tambola Board Game is unique in its design and its style. The finishing of the game will give wooden touch and feel while playing the game. No chemical colours, no plastic content used anywhere while manufacturing the game.

This makes the game board EASY TO CARRY anytime anywhere. You just need to join the 4 tiles together and start playing and have fun with your friends and family members wherever you want.

WHERE CAN WE FIND TAMBOLA AND PLAY?

WHAT DOES TAMBOLA GAME CONSIST OF?

This is a fun game to play with everyone just explain the rules once and your family and friends will get addicted to this game. Have a great family time. Throw a party or take it to any event or occasion and have a game night this game. We can make our own rules; keep exciting prizes for the winners. This will help in increasing amusement in the Game.

How to play Tambola on WhatsApp